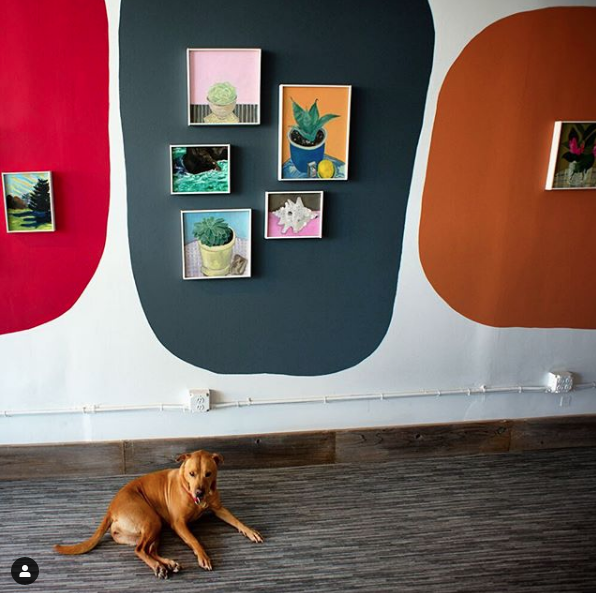 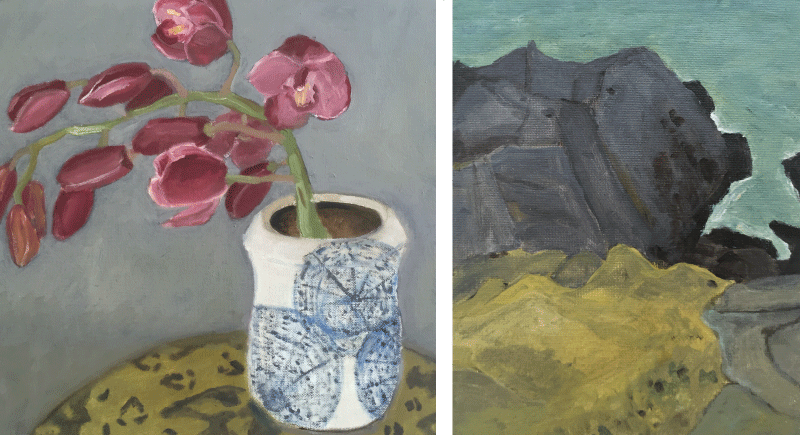 About the Artist
Van Elder was born in Brussels, Belgium. She graduated from Universite Catholique de Louvain, Belgium and received her MFA in Painting in 2003 from California College of the Arts, San Francisco. Van Elder’s work has been exhibited in California (San Jose ICA, SF MOMA Artists Gallery, Oakland Art Gallery, Berkeley Art Center, Marin MOCA, Headlands CFA, etc…), New York, Utah, and Tokyo. She was recently included in the national exhibition RTBF/Canvas, La Collection at the Palais des Beaux Arts in Brussels and featured in New American Paintings and Studio Visit magazine. She currently lives and works between Northern California and Brussels.

I have recently become visually fascinated by the northern coast and its unruly ocean and crashing waves, unpredictable currents, enduring rocks, ever changing contours and light, moody reflections, moving skies. Its ominous presence elicits both anxiety and comfort, unease and reverence, danger and trepidation, a certain longing… It is a place of chaos where the whimsical can rapidly transform into the catastrophic! (and environmental concerns) Contradictory emotional states get amped up! (Which is what compels me to paint!) The intimacy of my seascapes is a humble attempt to tame this mysterious force.

Oscillating between intimate connections with Nature, I also look at familiar objects and their reassuring domesticity. The things i care about, their tactile presence, their vibrant simplicity, their ephemeral power, their feminine modesty, the way I arrange them, the way they embody the memory of times and people in my life, their “hidden” little massages and drama, their seemingly unimportance… Still lifes hold symbols, seasonal cycles, personal meaning, a sense of vanitas , despite their “no fuss” quality. The same way the ocean does.

In the end, these small paintings are a quiet celebration of life, impermanence and hope and solitary bliss. 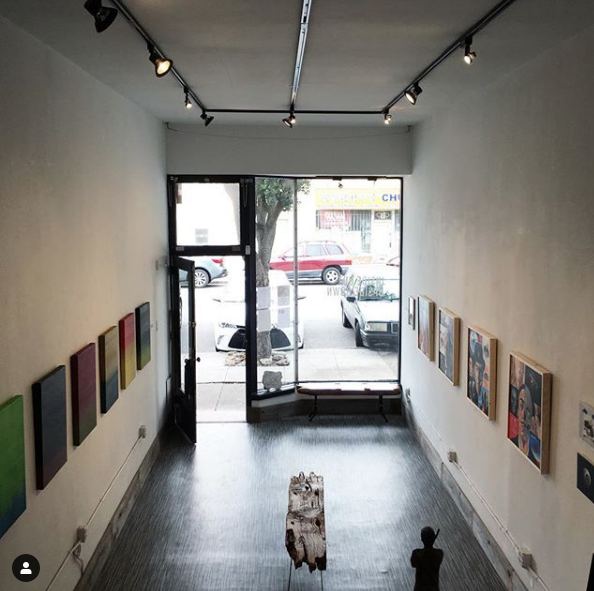 Inside Out Upside Down 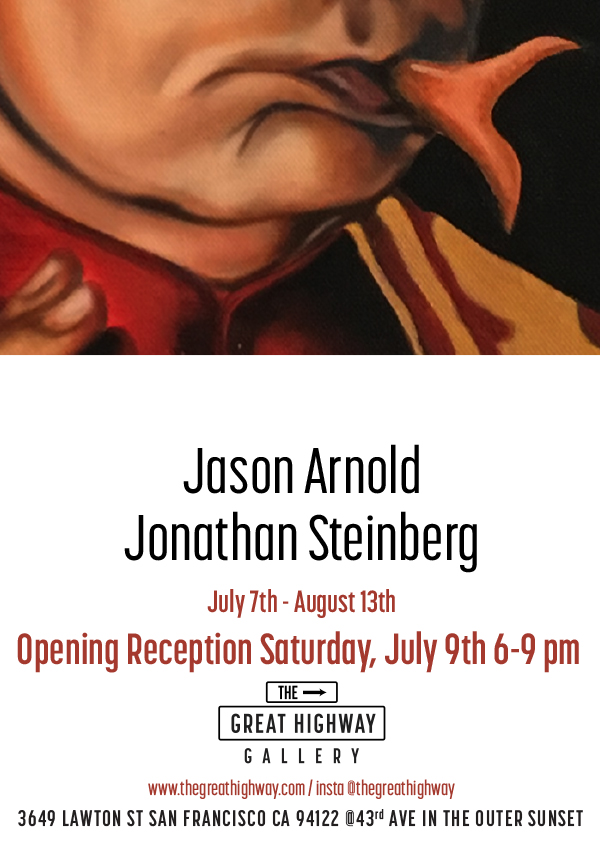 The Great Highway Gallery is pleased to present Inside Out Upside Down. The exhibition will feature the oil
paintings of Jason Arnold and mixed media works from Jonathan Steinberg.

Jason Arnold
“This new series of paintings are inspired by Andre Breton: writer, poet, anarchist, anti-fascist and founder of
Surrealism. I work in the skateboard industry which embodies many surrealist ideals and philosophies. I spend most days creating art that resides at street level underneath someones feet. Away from work, my imagination rises to the surface. My thoughts are liberated and begin to freely associate incorporating traditional and pop imagery.”

Jason Arnold is a self taught oil painter from San Jose California and is now a resident of Santa Cruz California. Currently Jason works as an art director for Oj Wheels and Krux trucks.

Jonathan Steinberg
“My art documents on the personality and narrative that mass produced consumer goods gain with age and use. For the past half decade I have been intrigued with swim fins. They have featured prominently in my two dimensional work, sculptures and installations. Recently, my wife pointed out to me that the color break in the rubber on my favorite fins approximates the color and feel of Mark Rothko’s large abstracts. She, as usual, was spot on. Displayed are close up photos of rubber swim fins from my shed. The works are an homage to Rothko and an effort to pull emotive character and beauty from a functional mass produced surf toy.”

Jonathan Steinberg lives, works, surfs and fishes on the Westside of Santa Cruz. 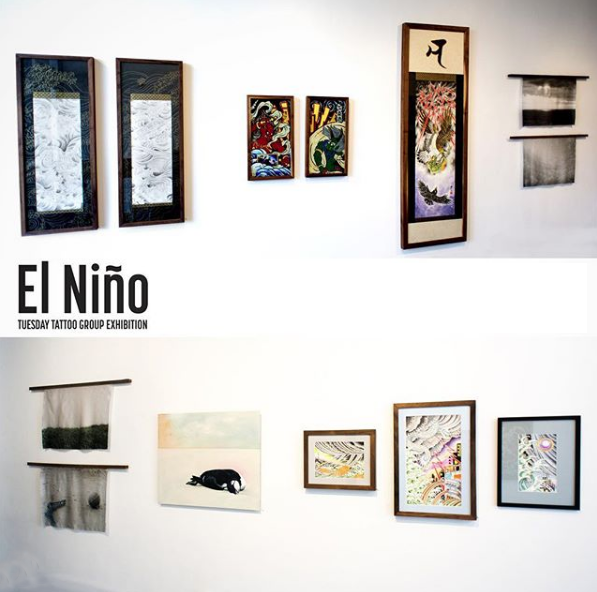 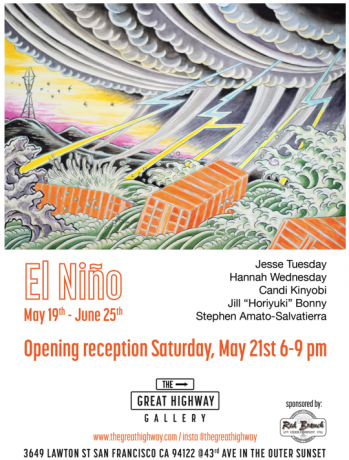 With the proximity of the shop to Ocean Beach these artists decided to observe and interpret the El Niño and its effect on their local surroundings. This group show is sure to deliver an eclectic group of images that will reflect the El Niño as more than a seasonal anomaly but as a concept.

Jesse Tuesday
Jesse’s early introduction to tattooing began in the 1980s through the rough bikers and wild punkers of the rock n’ roll world of Hollywood’s illustrious Sunset Strip. After working long hours cutting his teeth in a variety of shops with the likes of such greats as Jill Jordan and Pote Seylor he arrived in San Francisco in 1997 to work at Eddie Deutsche’s legendary 222 Tattoo. Here Jesse cultivated his San Francisco style tattooing; drawing inspiration from Japanese and traditional American iconography mixed with dynamic composition and color palettes. In 2008 Jesse opened Tuesday Tattoo in the, then quiet, beachside community of Ocean Beach and has since watched his shop grow and flourish along with the expanding neighborhood. Jesse Tuesday infuses all of his life’s experiences and artistic inspiration into his custom tattoos and water color paintings.

Hannah Wednesday
Hannah was born and raised in San Francisco and abandoned city life at age eighteen to study studio art at Humboldt State University. While in college she pursued painting and worked in an art gallery. This opportunity afforded her an appreciation of fine art while she enjoyed the simplicity of mountain living. She applies her knowledge and love of nature, with a specialty in Northern California flora and fauna, to her custom tattoo designs. As Jesse Tuesday’s first apprentice she has been tattooing professionally for seven years and has also shown her acrylic paintings in many galleries and group shows around the Bay Area and beyond.

Candi Kinyobi
A Hollywood native, Candi opted to forego an illustrious sign painting career with San Francisco’s New Bohemia Signs to pursue her passion as a tattoo artist. After completing an all-inclusive apprenticeship with Jesse Tuesday in 2012 she assumed the name Kinyobi (Japanese for Friday) and began her career at Tuesday Tattoo. Candi has a degree in printmaking from UC Santa Cruz and employs her fine art education coupled with her rigorous sign painting and tattoo training in her tattoo designs. With a refined take on lettering, Candi infuses her Japanese identity and graphic sensibility into the large and small custom pieces she designs.

Jill “Horiyuki” Bonny
Jill “Horiyuki” Bonny has been tattooing since 1996 when she completed an apprenticeship with Spider Webb at his studio in NYC while simultaneously attending The Cooper Union for the Advancement of Sciences and Art and performing full time in circuses and sideshows as part of a contortion duo. In 2008 she received the working title “Horiyuki” from famed Japanese tattoo master Horiyoshi III of Yokohama. Her writing has appeared in a variety of publications from the U.S. to Japan. While a long-time resident of the sunset she is the newest member of Tuesday Tattoo.

Stephen Amato-Salvatierra
Stephen Amato-Salvatierra is a self taught photographer hailing from San Jose, California. Stephen’s interest in photography began at sea. His first subjects were the boats, oceans and deck hands he encountered while sailing the world researching plastic pollution. While back home on dry land, he spends most of his time in the shallows photographing the surfers and marine life he can capture above and below the waves of Ocean Beach. Stephen is also a founding member of the Ocean Beach Yacht Club and manages Tuesday Tattoo in between aquatic adventures.