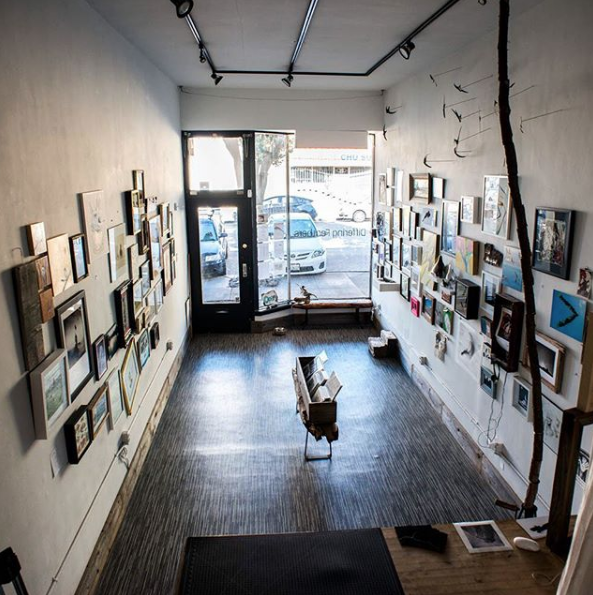 When different species of birds flock together, their flight interactions are determined by social dynamics both between and within a species. For centuries, scientists have been puzzled by the unified behavior of flocks of birds. One ornithologist even suggested they might be guided by telepathy. Other experts have suggested more reasonable explanations. One noted that mathematical models show that coordinated group movements can be generated by repeated interactions among individuals following simple rules. However, these models usually rely on the assumption that individuals within groups are identical and interact independently, which may or may not reflect reality. Interactions depend on social dynamics between the different species as well as relationships within a species.

The group exhibition Differing Feathers will mix mediums and artists to create a discussion around how social dynamics in birds can be applied to society.  The exhibition will feature painting, photography, sculpture, and mixed media. 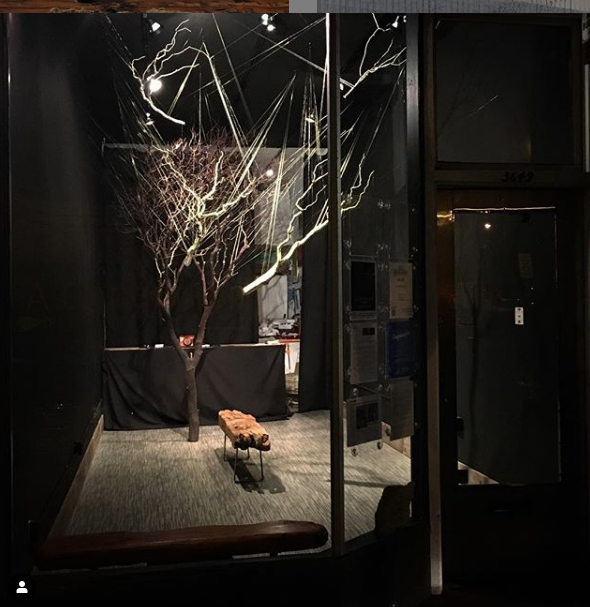 The Great Highway Gallery is pleased to present A Continuum, a site-specific installation by Peter Cochrane that will encompass the entirety of the gallery.

About the Artist
Peter Cochrane is an artist and an author. His work has appeared in BOMB, Headmaster, The San Francisco Chronicle,make/shift, SFAQ/NYAQ/AQ, Artslant, the de Young Museum, and others. He has created books that have traveled to theVancouver Art/Book Fair, the Los Angeles Art Book Fair, the San Francisco Art Book Fair, multiple Bay Area book fairs, andthe Room&Book Fair at the ICA in London. Exploring queer identities and the fabrication of histories through self-portraitureand installation is his prime interest.

Artist Statement
We yearn to know how we began. The creation of the universe is a story told through every culture, religion, and field ofscience. It is a man that breathes life into every microorganism over the course of the modern week; a divine being floatingon lightless water, black waves lapping against black sand, resting in the coils of a giant snake commanding the creation of the world using three parts of a flower; an explosion that marks the beginning of fathomable time, all atoms racing perpetually farther away from the epicenter with the evolution of life a freak accident of chance.

We are obsessed with how we will end. Ultimately, somebody else disposes of our remains. We are wrapped in linen strips in an attempt to preserve our flesh and bones and buried with the living. We are placed underground in wooden boxes, eaten slowly by microscopic things, and mixed into dirt. We are strapped to a raft, set out to sea, and burned by flaming arrows. Pyres set us aflame to great public acclaim, while we are cremated discreetly by incinerators and placed in urns or scattered to the wind at sunset.

Through A Continuum I honor the beginning, the present, and the end as a connected stream. I use the manzanita tree as a representation of the physical body with its muscular core structure and blood-red bark. Much like humans the tree grows from seed with a lifespan ranging between decades and a century lest it be cut short by disease, lightning strike, or wildfire. Once eroded or burned back to its elements it seeps into earth and continues as a source of nutrients for others. Have we have forgotten our own place in this reciprocal chain?

I wrap the branches in golden sewing thread as a representation of the energy that creates and destroys, and the impracticality of preservation. Like the spark that begins all or the fire that reduces us to soot, the golden thread cocoons the body during a time of transformation. Thousands of strings suspend branches in space as a representation of the innumerable people that buoy us along the great path. These same threads carry us through the final chapters of life, strands connecting physical bodies to the black ether beyond. They are vestiges of the mythological forces of creation—the trails of spirits come before and energies not yet released; the collective unconscious made manifest.

About the Gallery
The Great Highway is a fine art gallery located in San Francisco’s Outer Sunset district. The gallery was founded by John Lindsey, a long time resident of the city with a deep appreciation for images and ideas that explore the intersection of land and water in contemporary work. The Great Highway Gallery’s mission is to seek, analyze, support, and promote the work of a diverse group of artists who seek sincere authenticity, challenge conventional thinking, amuse us, and push the boundaries of today’s creative media. To learn more about the gallery, visit www.thegreathighway.com. 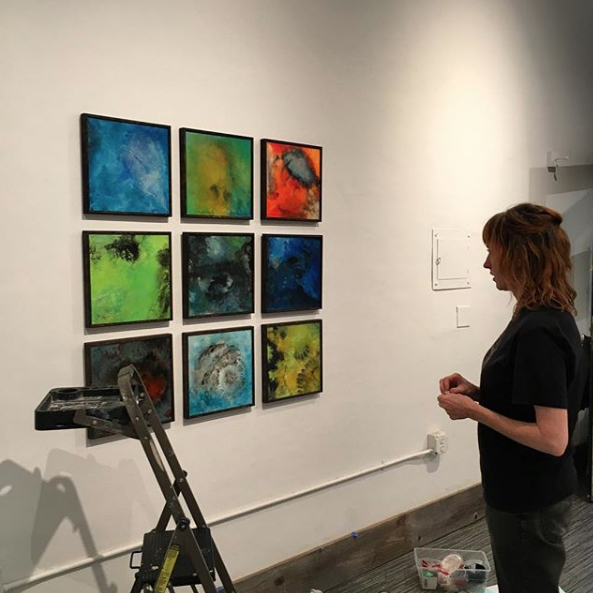 Around the Bay People

The Great Highway gallery is pleased to present Around the Bay People as part of the ArtSpan San FranciscoOpen Studios Hub exhibition weekend. The exhibition will display throughout he month of October with a closingreception October 29th during the Outer Sunset ArtSpan weekend 3 October 29th & 30th. The works will featurepaintings, photography and ceramic works by Loretta Bozung, Peter Cochrane, David Cronan, Patricia Hewett,Amber Hockeborne, Rex Mandel, Seren Moran, and Margaret Timbrell.

Seren Moran – serenmoran.com
Seren Moran was born in 1989 in Berkeley, California. In 2011, Seren graduated from San Diego State University’s Fine Arts Program, with an emphasis in painting. During her junior year of college, Seren studied abroad in the highly competitive art program at the original Leonardo da Vinci School of Art, L’Accademia di Bella Arte, in Florence Italy. “Being back in the Bay Area where I grew up had me wanting to explore more about my childhood and development, what forms who we are as adults, and what makes us call some place a home. I wanted there to be an energy to the paintings that felt relateble to that prepubescent age where we’ve struggled maintaining our innocence and optimism of the world, while simultaneously being exposed to more adult experiences.”

Margaret Timbrell – @margaretdth – margarettimbrell.com
Margaret Timbrell was born in Brazil, raised in San Francisco and graduated from NYU with a Bachelors degree in Studio Art. Margaret is currently a studio artist at Root Division. In 2018 Margaret will be the Artist in Residence at the San Jose Museum of Quilts & Textiles. “I’m also inspired by pop culture, both low brow and high brow. I like to combine this very traditional craft with referential phrases and autocorrect errors to bring together these different worlds and mediums. I’ve submitted for your consideration a couple of my text pieces that showcase both my technical skill and draw in the viewer with the use of language.”

Loretta Bozung
“This current ceramic work represents the impact of medical intervention on the human body and mind. Fragile bodies are represented by fragile ceramic work. Both bodies and materials are manipulated and pummeled, growing bumpy as new growth pushes it’s way out. In this way I hope to express the unbreakable link between our (my) biology and the seemingly inanimate quality of the clay.”

David Cronan
“I have been printing for 5 years, getting the most out of an industrial process from the small space of my home here. This limits the dimensions and quantity of what I make. The images are mostly from what I love to take pictures of in the city, busy and ephemeral stuff. The work has evolved in a niche habitat usually ignorant of sensible technical advice.”

Peter Cochrane – @pecoch – petercochrane.xyz
Peter Cochrane is an artist and an author. His writings and/or art have appeared in BOMB, Headmaster, The San Francisco Chronicle, make/shift, SFAQ/NYAQ/AQ, Artslant, and have been translated into Italian in a an obscure exhibition catalogue. He has created books that have traveled to the Vancouver Art/Book Fair, the Los Angeles Art Book Fair, the San Francisco Art Book Fair, multiple Bay Area book fairs, and the Room&Book Fair at the ICA in London. He works with and has an unhealthy adoration for flowers. Exploring queer identities through self-portraiture and installation work is my prime interest. I use beauty—that which may be calming and safe to look upon—as a tool to advance difficult discussions on death, inhumanity, desire, trauma, and recovery. As photography is familiar to everyone in the personal sense, as a record of our lives and moments and families, I use it as a lure to bring people into my reality, while installation is a tool of total immersion. The conversation about the photograph as a true or dishonest medium merges in the middle. It is both truth and lie, and the assimilation of all aspects of my personality built through myriad angles of history.

Patricia Hewett – patriciahewett.com
Patricia received a BFA in painting from the University of Kansas after undergrad studies at KU in Lawrence, KS and the University of Reading in England. “These gouache and ink paintings employ techniques similar to those used in Japanese suminagashi painting, Turkish Islamic ebru painting, and non-traditional printmaking. Whether above or beneath the surface of the sea, I delve within the landscape seeking to glean and interpret it’s mysteries and hidden forces that have shaped it.” ex omnia conchis -all from shells”

Rex Mandel
“For the past 36 years I’ve lived in San Francisco near the ocean. San Francisco, and in particular the people in it, are a constant source of inspiration. There is always something for me to discover and explore and I never tire of shooting both the city and people in it. When I’m out shooting, I get the same thrill as when I first picked up a camera and started seeing things from behind a lens.”

Amber Hockeborne @amber_hockerborne – amberhockeborne.com
Amber Hockeborne is a visual storyteller. A San Francisco Bay Area native, she began photographing while living\ along the US/Mexico border. While documenting lives on both sides of the border she gained an intimate look into life’s shared emotions. Currently residing in the Sunset district of San Francisco, Amber continues to photograph intimate perspectives of herself through those around her while working on her current ongoing project: On an Off Forever. I am sharing emotions of love: indulgence and depravation, union and distance, bliss and torture. Some of these feelings I crave while others I fear – all I have experienced. My own intimacy written in the journals of my heart and captured in photographs of close friends, lovers, and strangers encountered. I feel once we step into our story we are better prepared to understand not only the emotions of love but emotions which consume our lives.