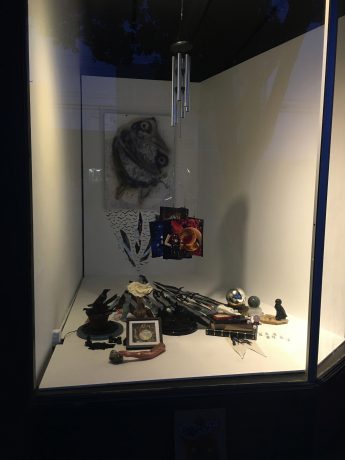 Crow appears across cultural and folkloric traditions as trickster, as scavenger, as guide to the other side. Crow remembers faces, creates networks of connection, and plays social games. In every part of the planet, there is one crow for every five humans. Throughout our co-evolution together, crow has secured a spot in the collective human consciousness; the poet Mary Oliver has referred to crow as “the deep muscle of the world.”

Crow Universe is a love letter to the mystery of crows, an ode to the feathered shapeshifters, illusionists of the void, and keepers of cosmic time. The work is an arrangement of personal archives, possessions, and artworks in clusters of physical information that summon psychic spaces. The interwingled elements of the work conjure a journey of collective storytelling—a balancing of the past, present, and future in the now. They are a rhapsody of fragmented parts coalescing into a unified whole.

The installation’s orbits, circles, spheres, and windows offer opportunities to dwell beyond the domains of space and time and peer into inner dimensions. Enjoy your visit to Crow Universe! Please feel free to bring any insights you gather from your journey back to life on Earth, as well as any revelations about our astral destiny, our terrestrial task, our fantastic dream.

About the Artist
Cedar Q Waxwing creates mixed media work with used and discarded materials to illustrate dreams. Waxwing deconstructs images through an intuitive process of cutting, tearing, stitching, and folding, and combines abstracted fragments together to create a kaleidoscopic sense of mystery, wonder, and exploration. Waxwing redirects attention to the natural, the serene, the celestial, defying direction in ethereal timeless non-spaces, generating a universal language as a surreal lens into the human and more-than-human experience. These otherworldly realms serve as physical records of visual mythography, magic, and meditation. 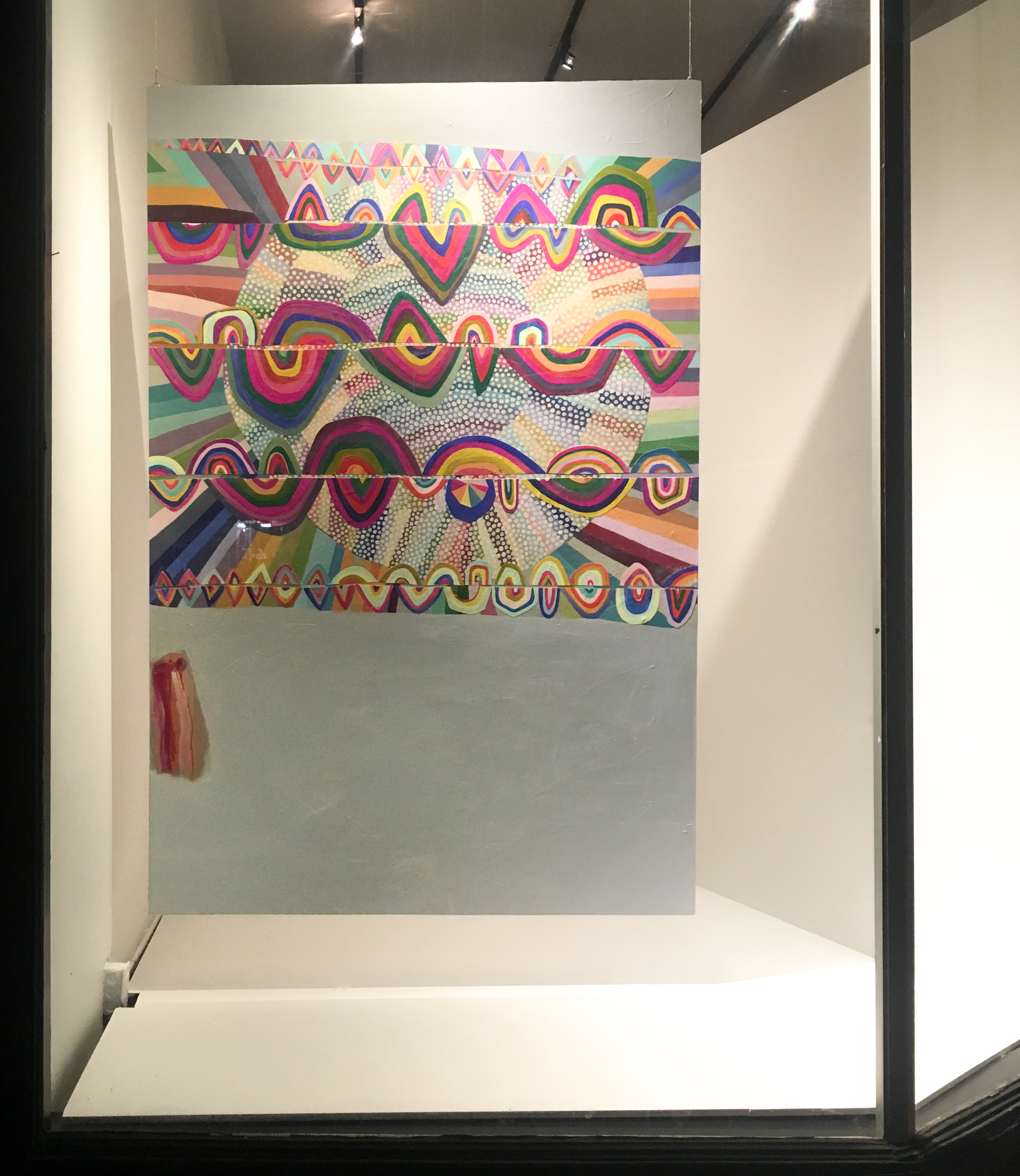 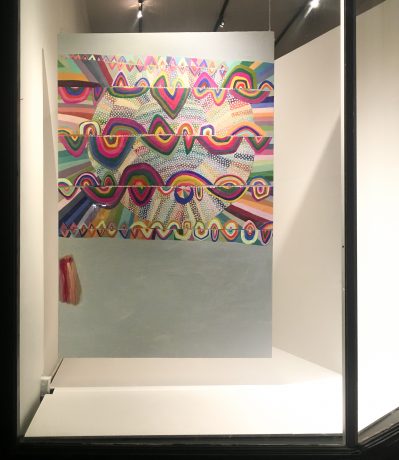 To encounter the newest painting by Yasmina Dedijer-Small is to be transported to the fragrances and sounds of the streets of Jodhpur. The movement of the population, the jostling, the maneuvering, at warp speed. The cacophony of colors, the swirls, the dark eyes, and that transcendent gossamer light, represented by the lightest overlay of points of white. This is an global painting. This is a global artist.

Yasmina’s art is not superficial. It is not high decoration. Her work embodies codes and descriptions of the primal and eternal weaves of life, from macro to micro, from nature to cultures. The weave unfolds and folds in sinuous patterns of nature and people. Whether illustrating cellular structures or the seemingly random but clearly mathematical arrangements of matter in deep space or the ancient beginnings of a contemporary indigenous tribal folk dance, she is articulate and lush.
About the 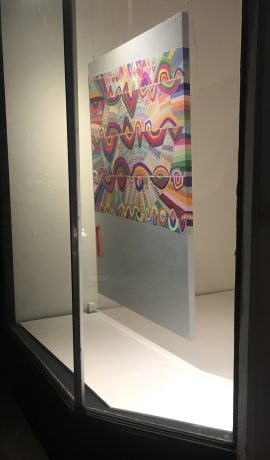 Artist
Yasmina Dedijer-Small, with immediate family roots in Yugoslavia, was born in Venice, California in 1975. Her travels are global. She currently lives and works in San Diego, CA. She received a Bachelor of Fine Art from San Jose University. Recent exhibitions include Leeward Surf and Sea (Portland, OR), The Great Highway Gallery (San Francisco)  Newport Visual Art Center (Newport, OR) Wieden & Kennedy Gallery (Portland, OR), H Space (Costa Mesa, CA) , The Grasshut (Portland, OR), The Santa Cruz Museum of Art and History (Santa Cruz, CA), and at La Kitchen (Paris, France). Her work has been published several times in Japan’s “Blue” magazine, The Surfer’s Journal, Salted, and Foam Symmetry. 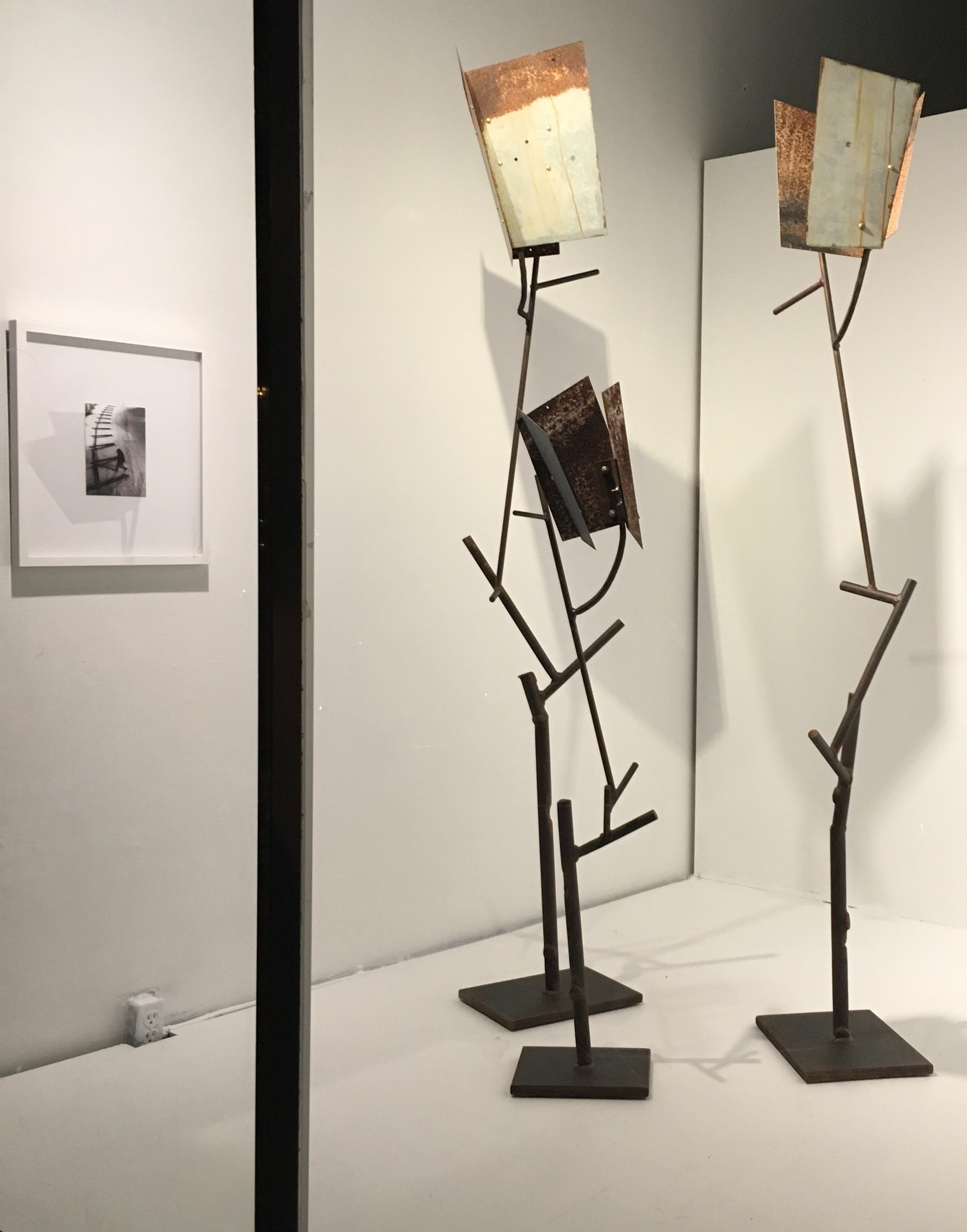 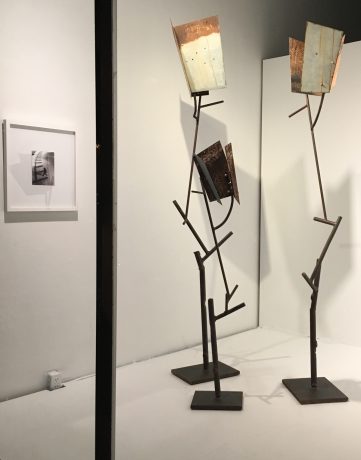 Artist Statement
The delicacy of a candlelit paper lantern hung from a spare branch or small tree.

The clarity of a singular object or text pinned to an expansive white wall.

These are visual sensations I particularly enjoy.

Sculptors for whom I have utmost respect, in alphabetical order: Robert Grosvenor, Barry Le Va, Richard Nonas and Anne Truitt.

They each articulate without unnecessary embellishment. They are succinct.

Here, I have brought from my studio wall a Richard Nonas postcard from his exhibition “The Man in the Empty Space” at MASS MoCA in 2016.

About the Exhibition
In this spare but rich exhibition in the newly formatted ‘window gallery’ at The Great Highway Gallery, David Kimball Anderson, now in his early seventies, revisits a body of work titled “Lantern/Paper”, begun in 1979 and completed in 1981, with three new pieces each simply titled “Lantern”.

In the exhibition Anderson continues his practice of acknowledging artists for whom he has deep appreciation with the inclusion of a printed MASSMoCA announcement for a 2016 Richard Nonas exhibition. In the forthcoming monograph by Radius Books, “David Kimball Anderson, Work, 1969 2017”, the writer Ma Lin Wilson-Powell quotes Anderson, “My art parents are Robert Grosvenor and Barry Le Va.” In this exhibition he adds Richard Nonas to the pair. Anderson historically reveals in his work source material and other artists whom he admires.

The artist’s statement, simple and concise, mentions his sensation and visceral pleasure of encountering “a singular object or text pinned to an expansive white wall”. This sensibility is evident even in the smallest of Anderson’s installations. In the catalog for a previous body of work, “to Morris Graves”, 2007-2012, the curator and writer Jim Edwards he writes, “There is a stark elegance to his spare installations. Anderson’s ability to strip his subjects down to their essential form, with just an added touch of embellishment, has allowed him to walk the fine line between minimalist formal truth and decorative adornment.”

About the Artist
David Kimball Anderson was the 1973 sole recipient of the SECA Award, San Francisco Museum of Modern Art. Anderson was included in the 1975 Whitney Biennial, Whitney Museum of American Art, NYC. Anderson has been the recipient of three National Endowment for the Arts Individual Fellowships among other grants and accolades.